Home / Faculty Profiles / Laura Macdonald: Travel and get involved in your field research

Laura Macdonald: Travel and get involved in your field research 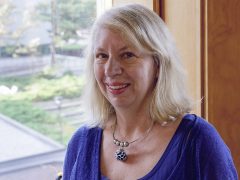 A colourful painting of Frida Kahlo stands out among the stacks of books in Professor Laura Macdonald’s office. The former director for the Institute of Political Economy loves all things Latin American. Whenever the professor of political science gets a shred of free time, she’ll embrace the outdoors, hiking and biking Ottawa’s trails.

When it comes to South America, Macdonald knows what she’s talking about.

Right now, her gaze is focused on the trade agreement between Mexico, the United States and Canada, or UMSCA, still commonly referred to as NAFTA. For trade news, it arguably dominated the latter part of the year in coverage. Macdonald has studied its political impact extensively.

Some of her past research includes looking at the impact of NGO assistance to Central America in the 1980s, including in Nicaragua and Costa Rica. She travelled to Mexico, doing fieldwork on the social and economic conditions there. Her findings reveal how social policies in Mexico can affect poverty rates in particular neighbourhoods, especially those communities on the periphery.

Her research stands in stark contrast to federal policies in the country and the militaristic cartel leaders’ different approach to street crime. Instead of looking at how crime and violence are handled through equally violent and aggressive means (prison or worse), Macdonald wants to know how they can be addressed in a more positive way.

She is also the primary investigator for the Observatory on Canada-Latin American Relations. She gathers research for the organization, focusing on how Canada influences countries in Latin America.

In 2016, Macdonald published an article on the Harper government’s foreign policy aimed at engaging with Latin American countries. The article underlines the importance of viewing class and state in the debates surrounding Canada’s role in the global political economy through a nuanced perspective, keeping in mind the changes and shifts on the international stage.

She writes, “I argue that approaches that situate Canada as either a dependent or a new imperialist actor ignore much of the complexity of contemporary changes in the political economy of the Latin American region.”

Her work also includes looking at gender’s place in a progressive trade agenda and its impact on women and workers.

For students with an international outlook, the Institute of Political Economy allows them to get involved, travel for their field research, a little bit like Macdonald. What’s great, she says, is graduates generally find careers directly related to their training.

Students can mold the program to fit their interests, and find work in what they’re passionate about.

When thinking about student research, Macdonald is reminded of two students’ fieldwork in Kenya’s urban slums. They travelled to the East African Rift and interviewed women at the marketplace in the country. In the end, the fruits of their labour resulted in an impressive project.

There’s no denying the students in the institute are a sharp bunch, led by similarly invested faculty, she explained.

It’s a small institute, one that doesn’t have the manpower or budget that other units do. And yet the cutting-edge research that it has produced has proved a force to be reckoned with, in the world of academia and beyond.