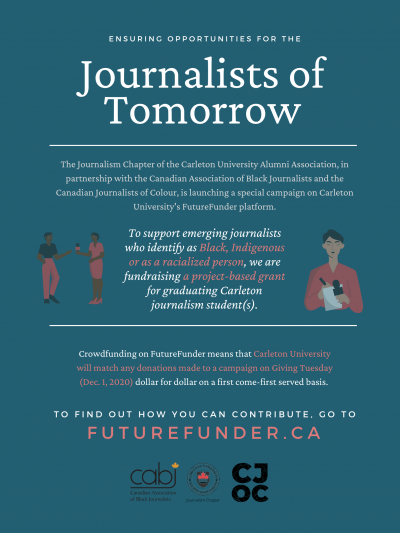 Graduates of Carleton’s journalism school have worked together with the Canadian Association of Black Journalists and Canadian Journalists of Colour to establish the school’s first award earmarked for Black, Indigenous and racialized journalism students.

A fundraising effort to support the new award kicks off Dec. 1 during Carleton University’s Giving Tuesday event. Donations made on that day to FutureFunder initiatives will be matched by the university. You can donate to the new award here.

The stated purpose of the new award is to “support graduating students with a funded opportunity to pursue reporting of their choice and to encourage students to shine light on the systemic injustices that exist within Canadian society today.”

The award will be given to a student or students in their final year of Carleton’s Bachelor of Journalism program and who identify as being Black, Indigenous or racialized. The criteria state that strong preference will be given to applicants who demonstrate an understanding of and commitment to the importance of diverse cultural backgrounds and experiences in newsrooms.

One of those involved in the initiative is Selin Kum, who graduated from Carleton’s Bachelor of Journalism program in 2015 and now works in government as a policy analyst with Shared Services Canada.

Kum said she was encouraged by the Black Lives Matter movement south of the border and that even though she’s the child of Turkish-Canadian parents, she realized that she had a lot to learn. A former classmate, international student Folarin Odunayo, sent her an article he’d written titled “Dear white friends, you no longer have the privilege of silence.”

Kum, who had been the president of Carleton’s Journalism Society, reached out to other past presidents and formed a Facebook group called the Journalism Chapter of Carleton University’s Alumni Association.

That group got in touch with the Canadian Association of Black Journalists and Canadian Journalists of Colour, to ask how they could try to make a difference at Carleton for Black, Indigenous and racialized journalism students.

“This got us thinking about what we could do beyond being performative allies on social media,’’ Kum said.

Supporters of the initiative have pointed out that every year, Carleton’s journalism school gives out a number of scholarships and awards, many of them to graduating students recognized for their specialization in such issues as business, politics, the environment and community and investigative journalism. But there was no explicit support from the school for Black, Indigenous and racialized undergraduate students, and formal support for critical reporting on race and racial inequality was also lacking.

The group was inspired by the calls to action to increase diversity within the journalism industry and at Carleton.

Kum said that in particular, the group took up two of the recommendations put forward by the Canadian Association of Black Journalists and Canadian Journalists of Colour, to create scholarships and mentorship opportunities targeted towards aspiring journalists of colour and to work to foster diversity and inclusion in Canadian journalism schools.

Once it settled on the idea to support an award for graduating Black, Indigenous and racialized journalism students at Carleton, the group reached out to the university and the journalism program to iron out the details.

The new award will be administered by the journalism program’s Permanent Working Group on Anti-Racism and Inclusion.

Recipients of the award can use the funds for reporting costs such as travel, to supplement internship income or as a freelance payment for a journalism project.